What is an appropriate monument for the current city of Philadelphia? This is the question engaged by Monument Lab, a public history and art project that collected hundred of proposals from members of the public responding to that prompt. Monument Lab officially wrapped up on November 19th, 2017. Throughout the month of October, archivists blogged for Monument Lab, combing through the morass of proposals and providing historical background to some of the topics and trends they found there. In case you missed it, here’s a roundup of those blog posts:

Where Charles Darrow Stole Monopoly by Celia Caust-Ellenbogen, Friends Historical Library of Swarthmore College
You may not think of Monopoly as a Philadelphia game, but its local connections run deep. Curious to hear the whole story? Don’t pass go, don’t collect $200 – just follow me on a journey into the archives! 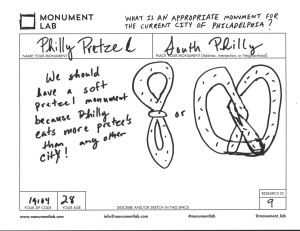 The Pretzel Proposition by Nadia Hassani of the Spoonfuls of Germany blog, for the Horner Library of The German Society of Pennsylvania.
How fitting and appropriate for a German pretzel monument to be here. Philadelphia is the pretzel capital of America.

From Draisiana to Bicycle by Alex Palma, contract archivist
Philadelphia has a storied relationship with the bicycle. This Philadelphia bike story begins in 1819, when Charles Willson Peale, a prolific Philadelphia artist best known for his depictions of the American Founding fathers, encountered the The “Draisiana” on display in Baltimore.

On the Waterfront by Katherine Haas, Girard College
The Delaware River is a vital working river–in 2017 Philadelphia’s port is the country’s twelfth largest.

Philly Prison Culture by Annie Anderson, Eastern State Penitentiary
Philadelphia, city of firsts, pioneered solitary confinement and the concept of penitence—a prison philosophy that, its advocates hoped, could rescue people from a life of crime. Once the world’s most radical leader in the reconstruction of penal practices and prison spaces, Philadelphia now has the highest rate of incarceration of any large jurisdiction in the country.

Feel the Music and Mary Elizabeth Greenewalt by Caroline Hayden, Historical Society of Pennsylvania
It’s common for people to talk about the feel of music; how certain songs can make you feel like gliding underwater and others shoot you into the air, and you brace for a free fall. Not as many people talk about how music looks, matching colors to genres.

The Stoop by Erika Piola, Library Company of Philadelphia
A “threshold between private and public space” is how Monument Lab artist Kaitlin Pomerantz describes the stoop. For Philadelphia photographer John Frank Keith (1883-1947), a city stoop often served as his outdoor studio.